How to Win Over a Difficult Person

Transcript of the Video:

I've got some really fun, tough love for you today. The topic today is ‘How to win over a difficult person’, whether that is a boss, a teammate, a coworker, a customer, even someone that you've worked with in the past that you're no longer working with, and kind of feeling a hangover effect from that. And it's impacting your job search or whatever your goals are right now.

If we haven't met yet, my name is Melisa Liberman. I'm a career coach for tech leaders. And I am a former tech executive, I helped build a SaaS software company to a quarter of a billion-dollar exit. I love the software world. I love corporate America. And I am now a full-time coach and I have been a coach and a consultant for the last eight years, helping other tech leaders get what they want out of their career, just like I've been able to do in mind. So, with that, let's jump in and talk about today's topic.

What is a “difficult” person?

For most of us, someone we're working with, usually, at least one difficult person, if not many, right? We encounter so many people that in our world, might be labeled as:

When I'm talking about a difficult person, those are the types of things that come to mind. So, before I move on, think about it for you.. What else what makes it difficult person?

What I'm not talking about today is:

I'm talking about someone who's labeled as a difficult person, because they're hard to get along with, hard to work with, hard to work for, etc. You never feel like you're doing the right thing where you can never get ahead with them.

As we go through today's exercise, think of one person - there's no right or wrong here - just think of one person. It could be your mother-in-law, your boss, someone you manage, or a customer. Write them down, and then we'll go through some exercises here, after we talk a little bit more about what makes a person difficult. So now that you have your person in mind, I have so tough love for you.

Why Are They Difficult?

I want that to sink in a little bit, because the next point is really going to home in on this concept. We're the one who's making them difficult. It's not what they're doing. It's how we're interpreting what they're doing. And you might tell me, I'm crazy, you might be angry right now, but hear me out. Because this concept I struggled with, toward the end of my corporate career, it really, I cannot tell you more strongly how much time I wasted because I didn't understand this. And it made my life so much more difficult.

So, with that in mind, I would love to dive further into this concept of it's our own perception of the person, not the person themselves.

Think about a time when two people - one difficult one not difficult - missed a deadline or change their mind or gave really hard feedback.

How did you handle that? Generally, the answer to that question is the person who's a non-difficult person, you gave them a pass of some sort, you gave them the benefit of the doubt, right?

The non-difference is the difficult person, the person that you see is being difficult. You added that to your pile of evidence that they're difficult, and it just further increase ingrained in your mind that this person is a difficult person.

And I'm using the word view right now, there are many of you on here, and we're all doing this. I am calling all of us out collectively here, because I know how much impact positive impact seeing this can give for you. So ,when I say you, it might call you out specifically, but I'm telling you, everyone's doing this in some way form or fashion, whether it's our mother in law, or our, you know, CEO, or whomever it is.

What happens when you're thinking or labeling them as being difficult?

Like I said, as humans, we're scanning for evidence that we're right, by human nature, the way our brain works, we're scanning for evidence to prove ourselves that we're right. So, when we decide someone's difficult, then we're looking for all that evidence to make ourselves right, to show that show that they're difficult, and it ends up compounding it. And we end up believing they're difficult because we're finding all of that evidence, and it creates negative emotion for ourselves.

So, with this negative emotion, we change the way that we interact with the person, which again makes our life more difficult. When we're thinking this person is difficult, I have all this proof. Other people even are saying this person is difficult. If we end up take taking actions or inactions by thinking that, then lead us to procrastinate right, or to avoid them or to complain about them. I will be completely honest with you, I know I can't even - I don't even want to add up the number of hours I probably wasted over a two-year period, complaining about the CFO of my old company and all of the bad behavior in ineptness that was occurring at the time. And there were a lot of CFOs at that company. So, you know, it's really, really a place where it becomes this kind of self-fulfilling, self-growing situation, right? You're making your own life more difficult by thinking the guy is difficult, or the person the girl is difficult, by then feeling so hopeless or angry or frustrated. And that causes you to avoid them or complain about them are overcompensates? And that then makes your own life more difficult. It is not the person who's difficult who's causing this.

What do we do?

We can't change the difficult person where he's not even difficult, really, at the end of the day, it's our perception of him, right? So, what are we left with here? This seems like really bleak, a bleak information set of information I'm giving you but it's not I promise you.

How can we neutralize, even win over the difficult person?

…even though we can't change them, by literally just three steps.

They very simple. They're not easy. In most cases.

Let me give you a little bit more underneath this. Because again, like I said, it's a simple concept, but it's not easy to implement. Essentially, in a nutshell, in order to win over a difficult person, we essentially need to win over ourselves, we need to get out of the blame mode. And to see that this label of being difficult is not a fact, it's just a perception. And something that we've been building evidence for over time, because we had that perception. So, it seems even more real, and probably some people agree with us. But in order to get through this situation and make it more productive, and show up in the way that you want to which I assume is not avoiding procrastinating, blaming, commiserating all of the taking up so much of your energy for really no benefit. In order to get out of all of that mode, we have to get into a solution focus mode.

And this isn't about judging ourselves, like we shouldn't be doing this or that person shouldn't be this way. It's just literally about saying I have control over the situation, because of the way I'm looking at it. And I can get myself out of blaming that person and feeling like I have no control in the situation into more of a solution focus mode.

Does this mean I’m Condoning or Enabling?

I will tell you again, I spent a lot of time in one of these thoughts if not all of them and it literally gives no result you are thinking that you're condoning their behavior or somehow punishing them.

You being angry - you know, all those feelings we talked about: angry, passive, aggressive, frustrated - doesn't fix or change them.

I have a client who has a who came to me and said, I have a demanding, unpredictable CEO. His thoughts about the CEO are: he's crazy, he's disrespectful, he's unrealistic, he's unchanging, he's constantly being late to meetings, changing priorities, skipping meetings, scheduling meetings without any context - just all of this bad behavior, right? We could label him as this right?

And on top of it, he's the superior, right. So, it feels like I don't have any control. In this situation, I'm stuck, I either need to learn to live with it, or I need to find a new job. But instead, as we started peeling back the layers, we realized for that client and it could be for you, too, that he was actually enabling this crazy in a way, because he was feeling like this CEO, no matter what the CEO is difficult. And I have to live within his difficult rules in order to keep my job here. And what we realized is that was so many people pleasing going on from these thought processes about the CEO. When he started looking at it more objectively, from the sense of this is not an in movable situation, the CEO isn't difficult, and therefore I'm stuck. We were able to start asking so many better questions.

If you able to take a step back and say, they're not a difficult person, this is how I'm looking. The way I'm looking at this and perceiving it, is what's causing me to feel like it's a fixed situation that I can address. In order to look at this differently looking at it and saying, Okay, this isn't fixed, this isn't. This isn't a difficult person, you know, quote, unquote, opening your mind and saying,

The scenario where a customer's constantly changing their mind. They're not even acknowledging it. They're like, “What are you talking about? I told you this all along”, and you're like, “No, I know, for a fact this is different.” Or they're adjusting the scope, or the time frame or the or the budget, and one of those three elements, but really not adjusting the overall right, if you change the scope, you need to change the timeframe, in most cases, right. These call these customers that are constantly changing their mind and just not budging, they, we will, it's so common to label them as difficult, or they're not trustworthy, or maybe they're inept. And it becomes this fixed situation where it feels like you have no solution. But if you can see that this is partially if this is all your interpretation of this customer, another person might go work with a customer, right and think they're amazing. It's your interpretation of the customer, which again, isn't you're not doing anything right or wrong. It's just human nature. But when you're interpreting them as inept or untrustworthy, it shuts down your ability to find solutions for the situation. So instead of thinking in that fixed away, look at it from the perspective of

Those are three examples of how this concept works and how you can apply it in a way that allows it gives you really productive questions to ask yourself, that help you to find solutions to this problem situation, versus just labeling someone as difficult and kind of shutting down as a result. 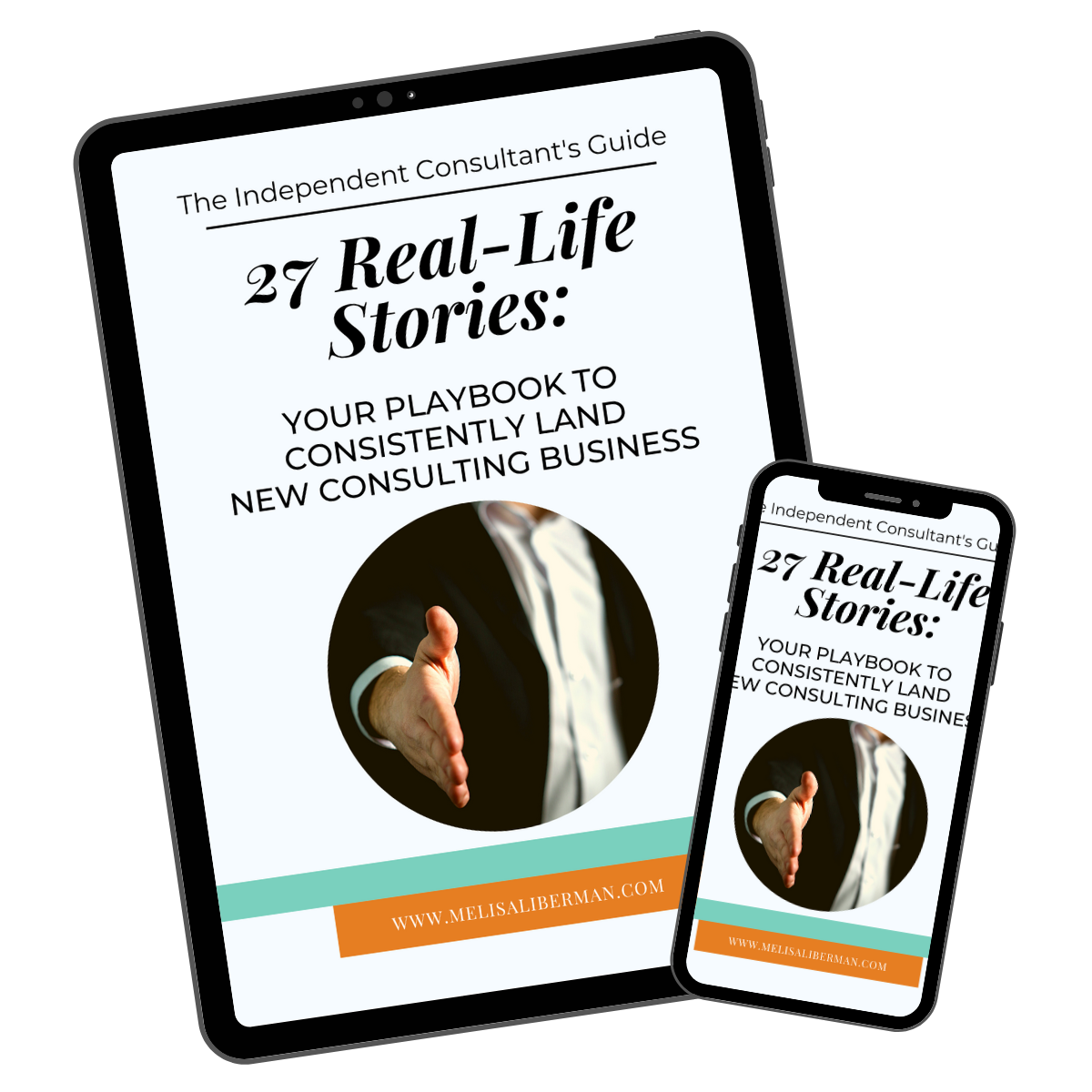 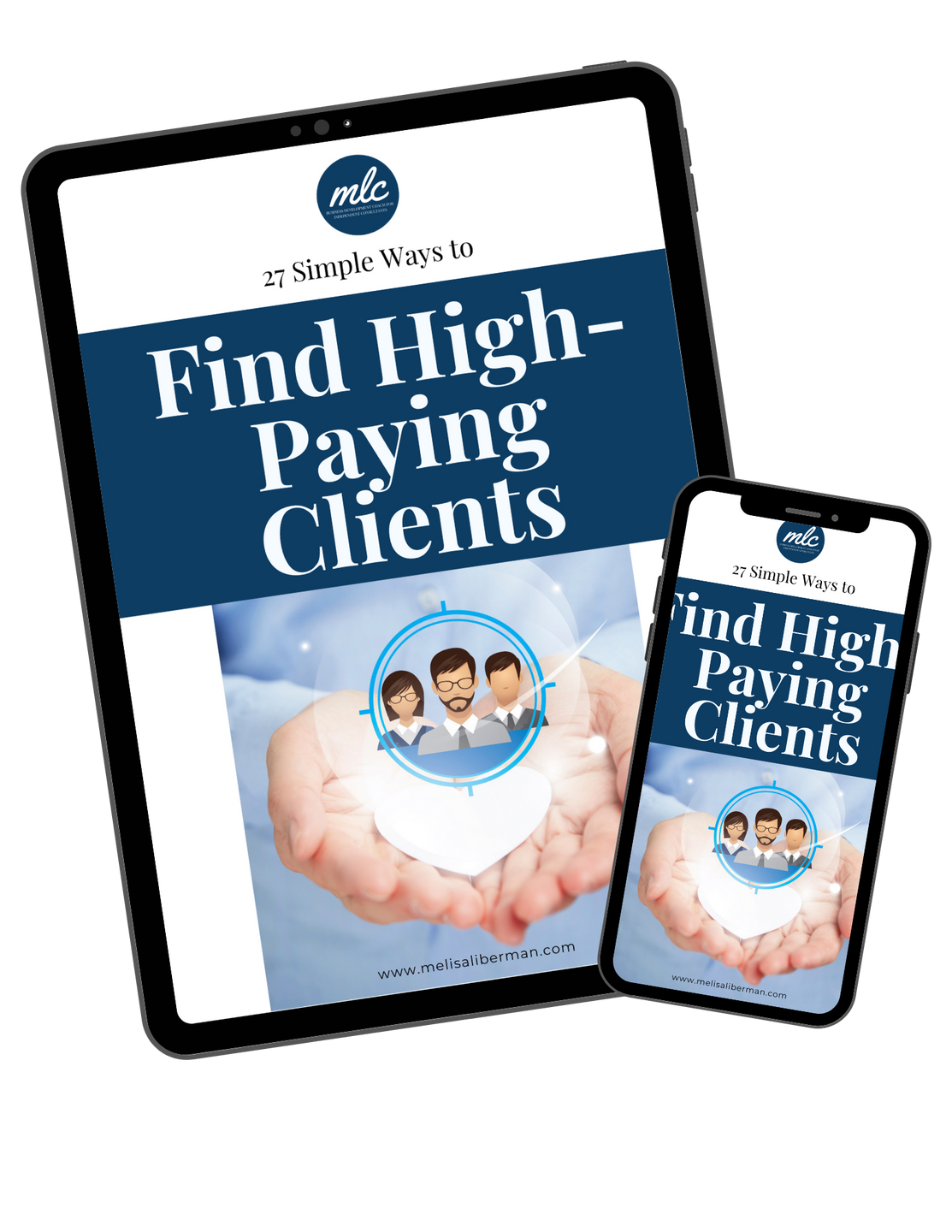 27 ways to find and land your ideal consulting clients