Insights from 31 Years as an Independent Consultant with Susan K. Moore 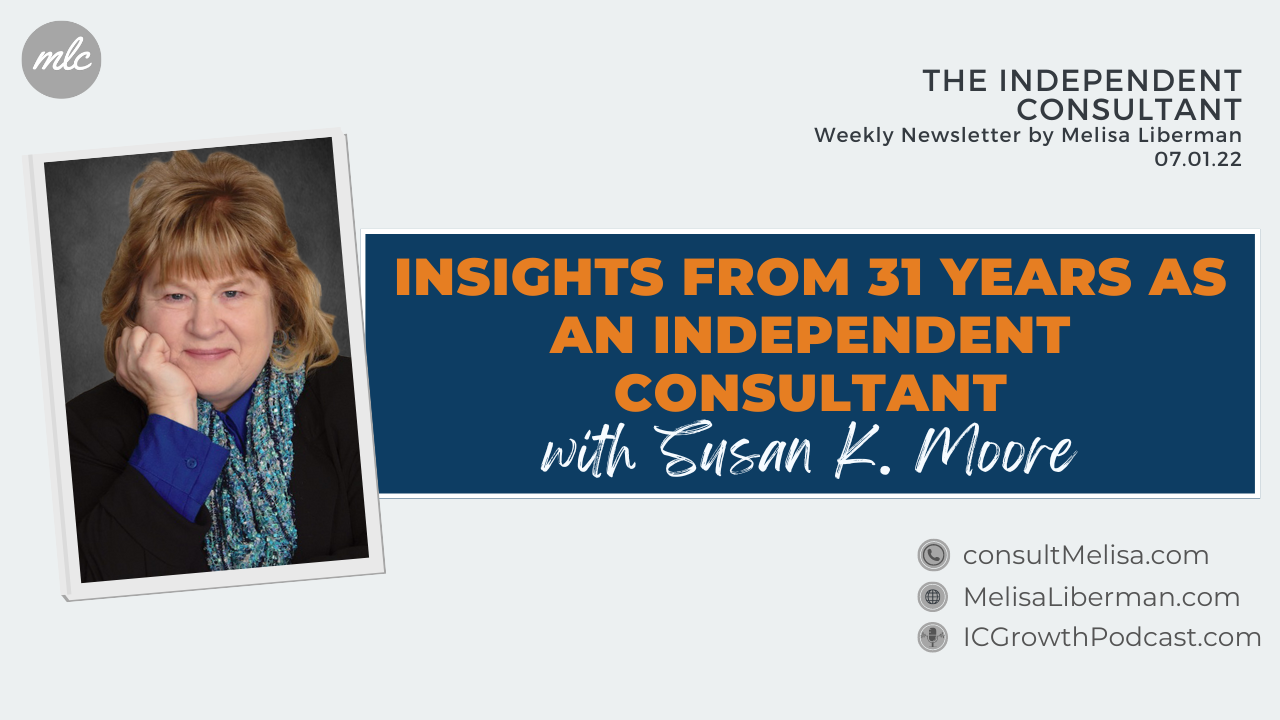 In today's article, I interview Susan K. Moore who has been an independent consulting business owner for the past 31 years.

She has to be one of the first IC business owners....she's a true pioneer and has so much to share with respect to lessons she's learned owning a thriving consulting business, first as an independent and more recently as a boutique consulting firm owner with 19 sub-contractor working alongside her.

Here are a few topics we covered. And, there's so much more. Be sure to read below and listen to episode 068 of the Grow Your Independent Consulting Business podcast. 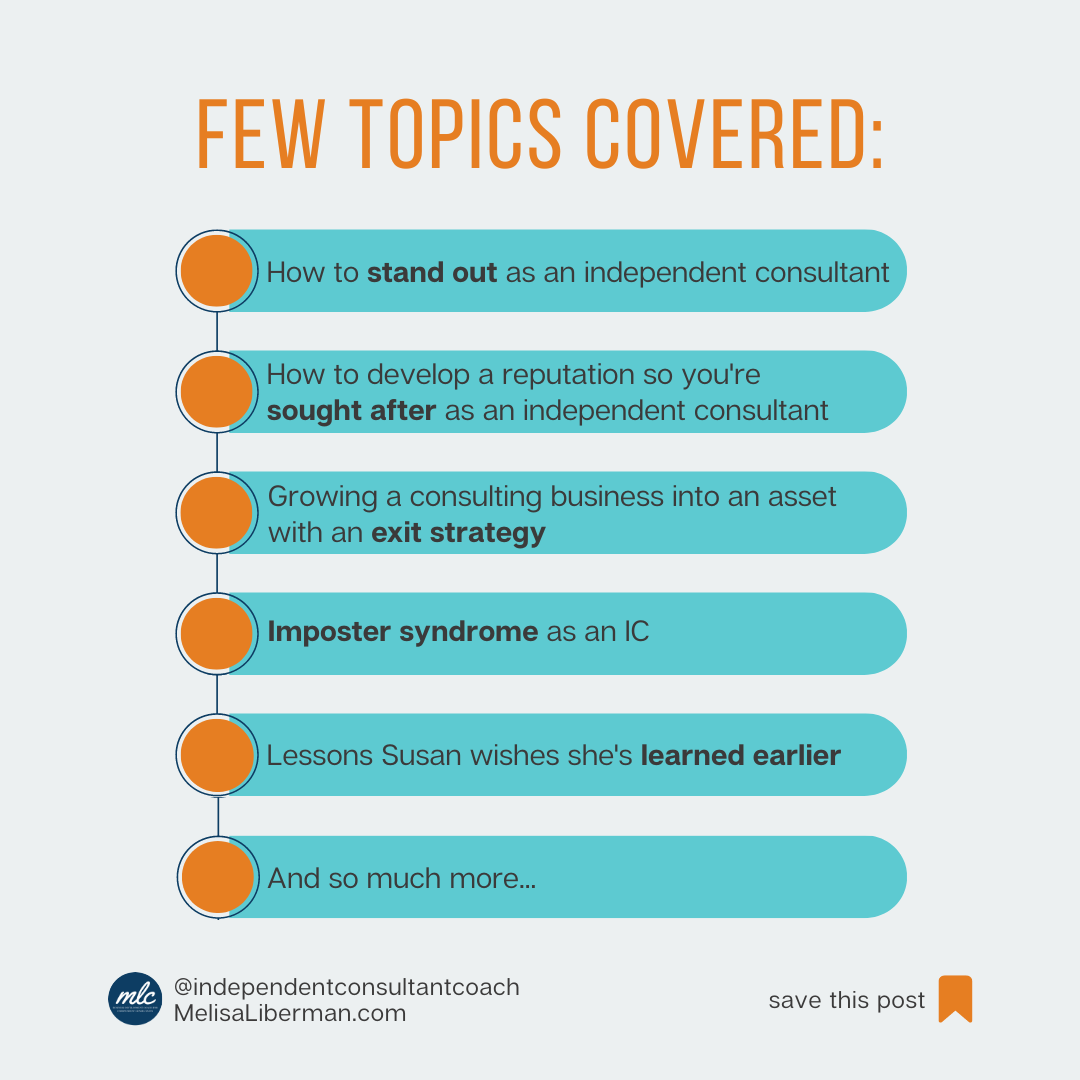 I recently interviewed one of my clients and my friend, Susan K. Moore, for the (Grow Your Independent Consulting Business) podcast.

Susan’s training is actually in nursing, but over the years she worked her way up to Director of Operations.

She was always working towards upward mobility, but more towards independence.

After starting out in general consulting, she eventually niched down to work in healthcare accreditation.

But it's her clinical background that helps her with landing those clients because they're looking for somebody who understands the industry and clinical quality.

In this interview, Susan shared a wealth of knowledge as well as things that she would have done differently. She also offers up some amazing advice for other independent consultants.

Susan is a trailblazer…

Susan spent a good deal of her corporate life cleaning up other peoples’ messes after they did something she advised them they shouldn’t do. She also felt like she didn't fit into the mold of corporate life, and she wasn't politically correct. So she thought if she was going to dispense information, she wanted to be successful and compensated for that better than she was at her corporate job.

Truthfully, Susan is a trailblazer. When Susan decided to become an independent consultant, it wasn’t as popular or even close to being the norm as it is today. It was also not very common for the woman to be the primary breadwinner and the husband to be the stay-at-home dad.

Susan was working as Director of Operations, in a Master’s program, and had two young kids at home and another on the way. But it wasn’t until after her pregnancy that she was diagnosed with Chronic Fatigue Syndrome and Fibromyalgia that her life needed a change. She needed to be able to rest and refill her cup during the day, but working in an office environment meant that wasn’t necessarily possible. So she took the leap into independent consulting so she could better take care of her health.

There was one person who had been her past client and wanted to leave corporate because her husband was having some health issues. She decided to contact Susan to get advice on how she could get into independent consulting. At the time, Susan had a lot of work so she asked her if she would like to work for her. The rest is history. Susan has continued to hire more consultants as she needed them and built a lean and profitable firm along the way.

What’s the secret to keeping her business lean and profitable? 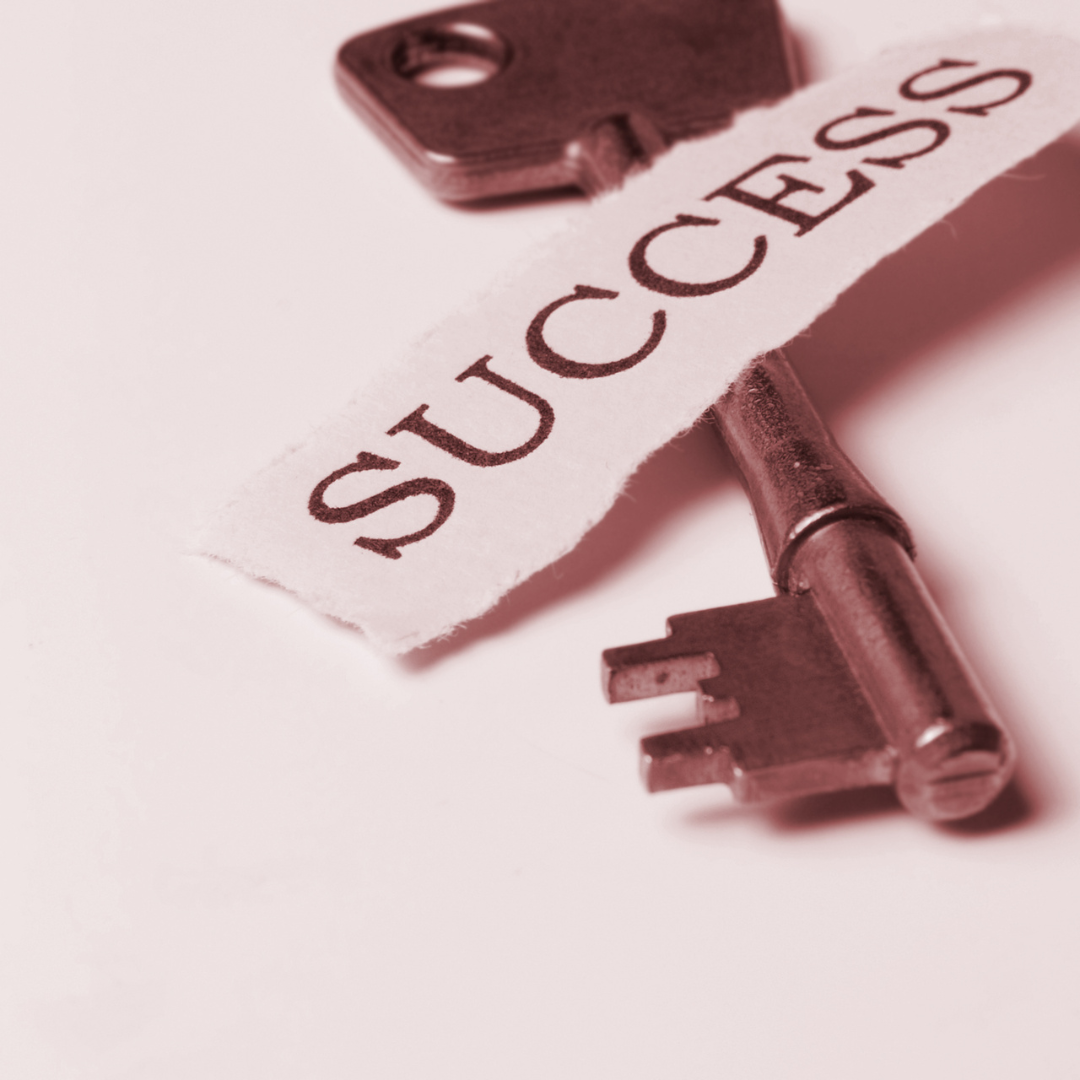 Susan never hired a consultant without actually needing them because she never wanted to jeopardize her income. Her family depended on it. That being said, she also had to be willing to take the sacrifice of working a lot more, not just on growing the business, but in the business as well. Currently, she personally has 2 clients because she didn't have anybody that could take them on due to their current client load.

Truthfully, Susan hates a lot of administrative overhead. She likes to slot people in as she can and make sure that everybody is working at the highest level of their license and capabilities. Then, she focuses on training then to take on more responsibility.

She’s also put time and money into automating processes in her business so she doesn’t have to touch everything. There's always that push-pull about what you should do, what you can do, and what you can do better. You just need to teach other people to do these processes and give them enough support to do them. That's basically how she’s been able to keep lean.

Susan will most likely be able to sell her business when she’s ready to retire, which isn’t the case for most independent consultants. Her business is a marketable product.

She’s actually been approached by three different people that are interested in buying the business when she retires. Even though she hasn’t built some of the other infrastructures that need to be built, they're still interested.

What lessons has Susan learned while running an Independent Consulting business so far?

Susan shared 3 main lessons from the past 31 years.

She would have done a few things to establish credibility like build a website. The one thing she definitely would have done even before building a website is to invest in a Client Relationship Management (CRM) tool to automate a lot of information and help generate constant contact with her clients.

How did Susan build such an amazing reputation in her industry? 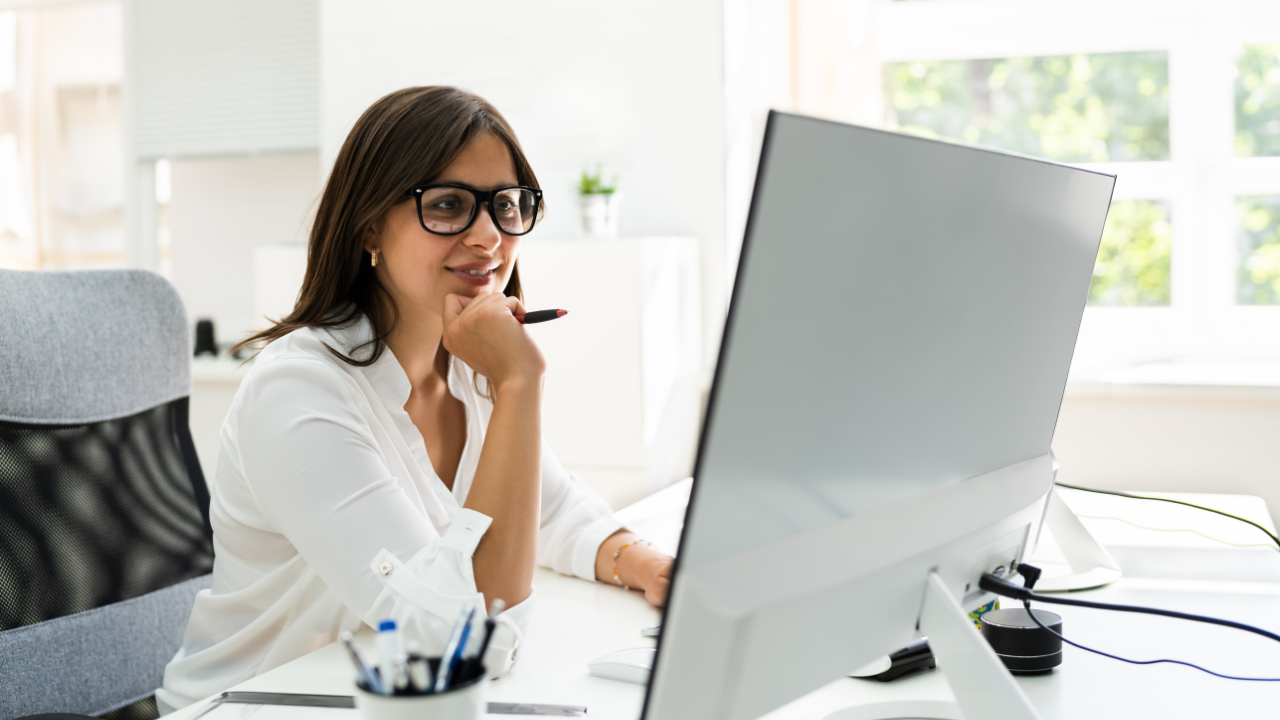 How does Susan keep impostor syndrome at bay enough to be able to not let it slow her down? 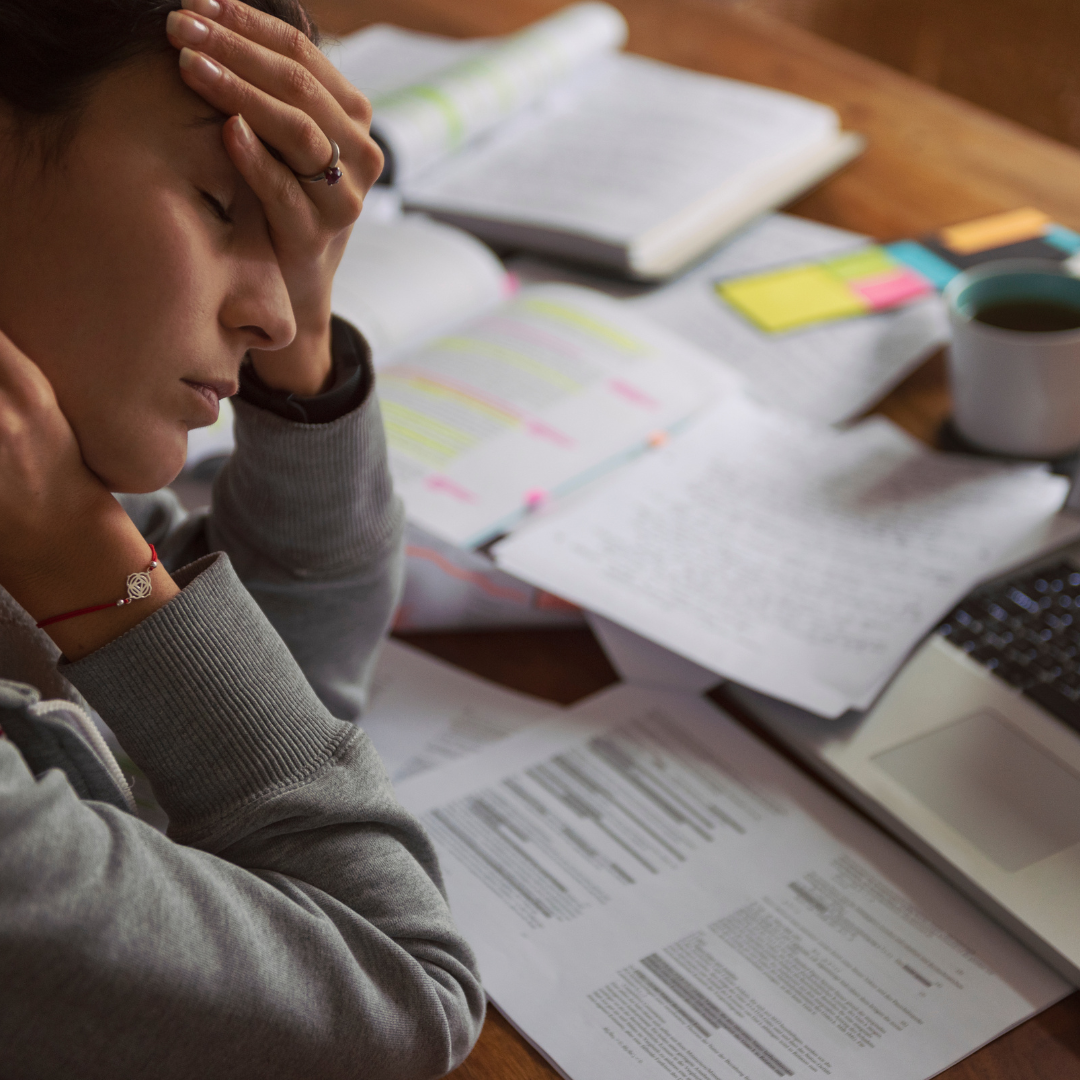 Susan loves to write and speak in front of others about things that she is passionate about. But it was her job as a role model for her kids that helped her to keep her imposter syndrome at bay. Because she saw herself as that role model for her kids, she did things even though it made it a little uncomfortable to model that behavior for her family.

Susan believes that no matter what your fear is, you can do the same thing, too. You definitely have to have the drive to overcome imposter syndrome. A lot of us stop when we feel that discomfort that Susan referred to when it’s actually a signal that this is uncomfortable which is part of running a business. You just need to learn some techniques to overcome it and keep going.

Why did Susan decide to hire a coach?

Susan has been in the game for a while. So much so that she felt like she was on autopilot. As she was starting to look at retirement, she wondered what she could accomplish before she retired. But she needed a kick in the pants to get her going.

According to Susan, hiring a coach (like Melisa) is so beneficial because it helps you get out of your own way. It questions what you've been doing, why you've been doing it, and why aren't you doing something else. Susan needed somebody to help her get to the next place and get out of her own way so that she could do that.

Results of coaching that stand out for Susan

The two first things that come to Susan’s mind are that she increased her billing rate, and coaching helped her get other resources. After all, you don't know what you don't know.

Another result that stands out for Susan is being held accountable. Somehow, as independent consultants, when you have flexibility, you also have less discipline. Working with a coach helps to create that discipline.

Susan also saw the value of having Melisa work with her consultants who've never been consultants to help them make that transition from the employee world into the consulting world, and independent consulting. It has truly been an honor to work with both Susan and the consultants in her business.

When you start out, people seem to be more of a generalist to get work. You're afraid that you're not going to have enough work so you take on everything that comes to you. Unfortunately, a lot of those things just make you a staff augmentation as a contractor instead of somebody who dispenses advice.

Make sure you set your priorities and follow them. Always be linked to your north star, ethics, and integrity. Your reputation is the only thing that you have and it takes a lifetime to develop. So guard your reputation and your integrity. Follow your ethics and integrity and don't ever deviate from that. If you follow your priorities, that will always keep you in a good place. 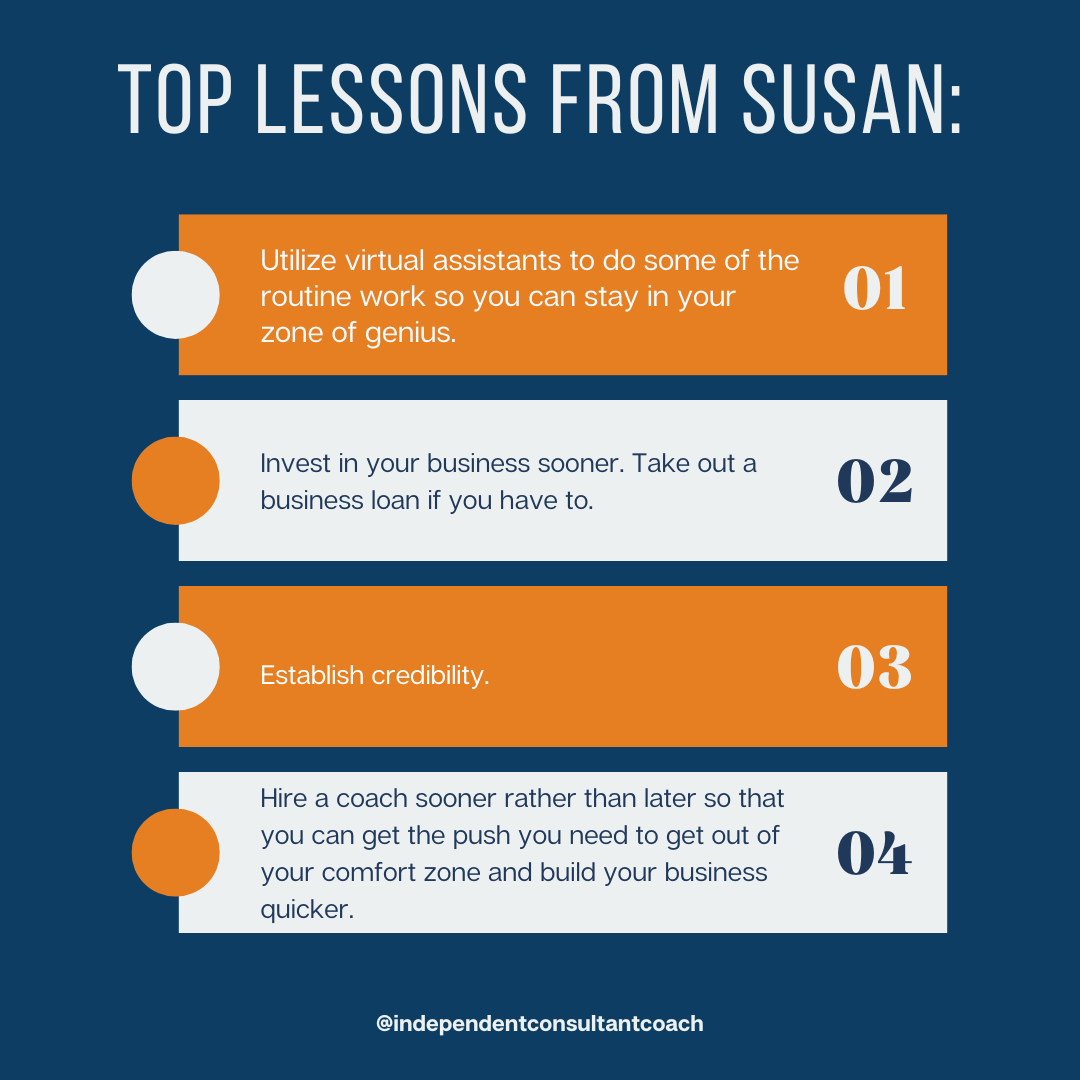 In Summary: Put This Article Into Action

Susan Moore shared so many valuable tips, strategies, and lessons learned from her past 31 years as an independent consultant who scaled into a boutique consulting agency owner.

Put this into action:

The assessment dives into the 5 aspects of your consulting business that are critical for profitable and sustainable growth and provides you with an actionable, 15-page Scalability Scorecard report.

You'll walk away with your top 1-2 priorities to focus on in the next quarter, so you can increase your income, increase your impact, and do it all while working on your own terms. 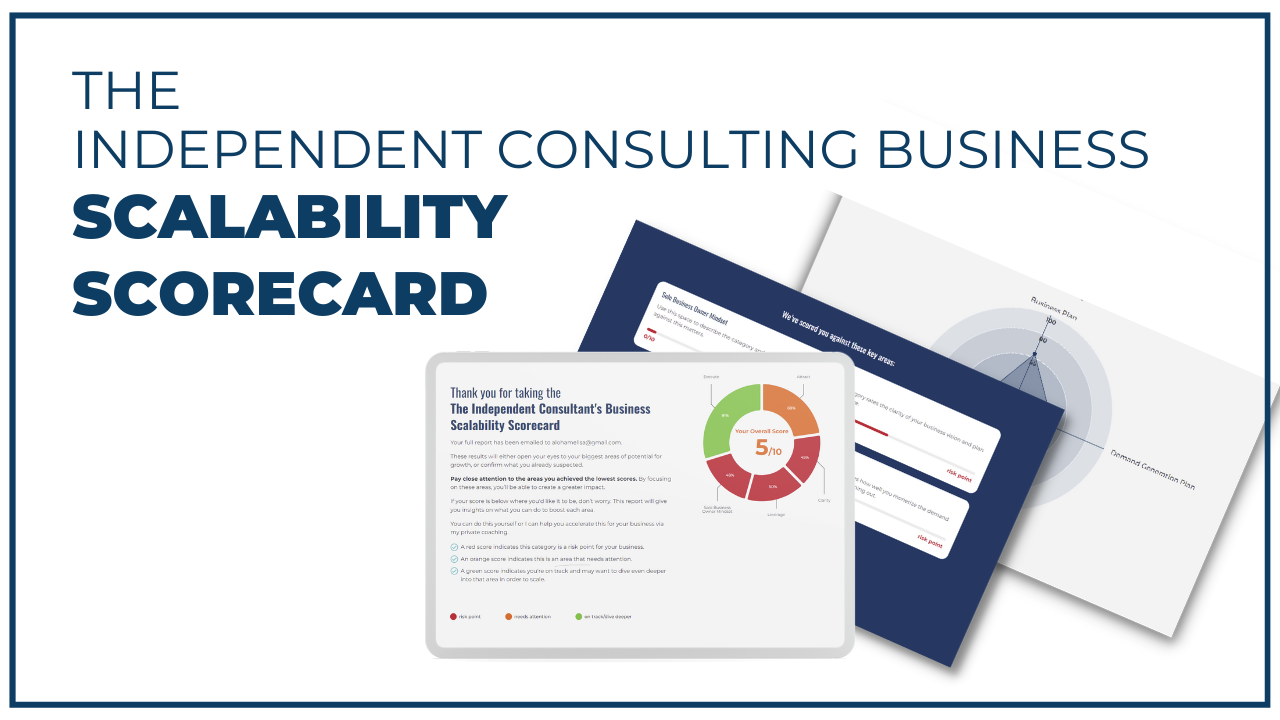 Melisa is a private business coach for independent consultants. She helps IC business owners scale their business so they make more money, make more impact, and grow a business working on their own terms. Melisa is the host of the Grow Your Independent Consulting podcast and creator of the scale-IC Method™️.