The Impact of Undercharging In Your Consulting Business: 7 Examples (part 3 of 4) 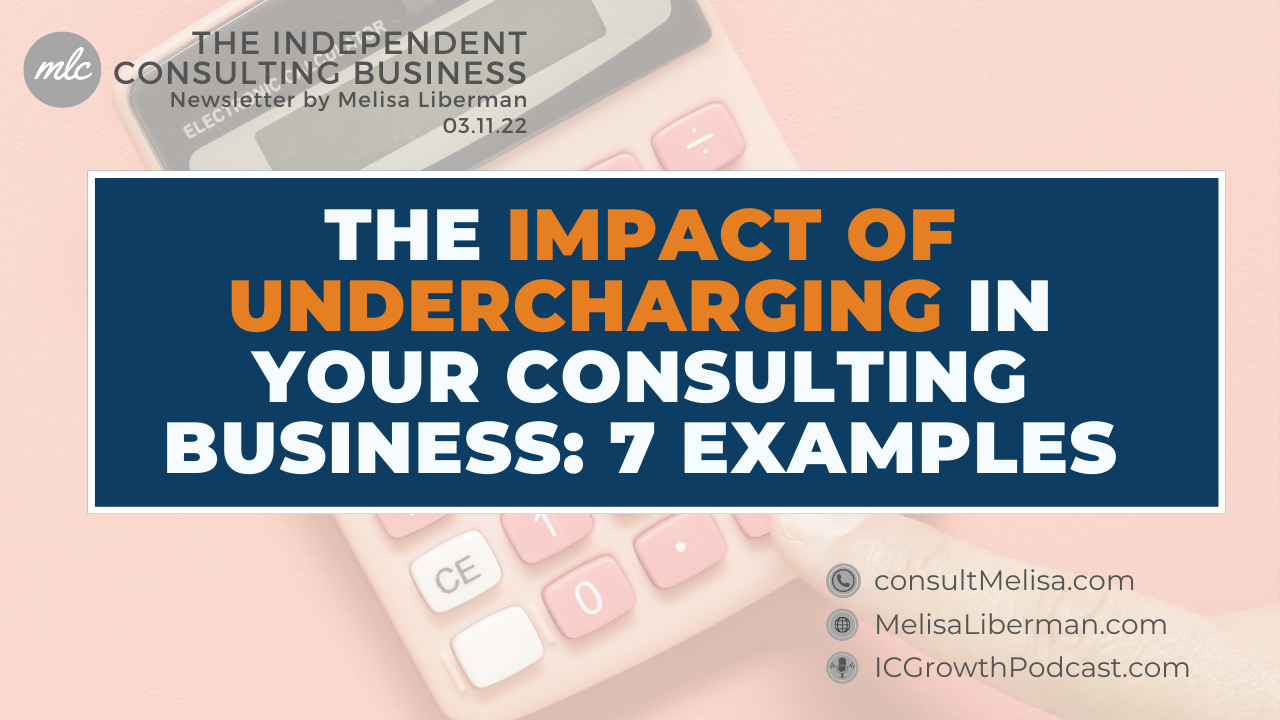 The Impact of Undercharging In Your Consulting Business: 7 Examples

This is part 3 of 4 in the Undercharging as an Independent Consultant series.

In this article, I’m going to share the impact of undercharging in your consulting business.

It’s imperative to address the areas of your consulting business where you’re undercharging, as it compounds over time. I’ll share more on this compounding effect in a minute.

But, first, a quick reminder that this article is part 3 in a 4-part series on undercharging. After you read this, you can find the other articles at:

OK, let’s assume you’re undercharging in some way (almost every consultant I meet is).

Why does this matter?

Let me show you how the undercharging might seem minor, but in reality, the impact compounds over time.

Caveat: I am sharing some real-life examples below. As a matter of practice, I don’t share any client-specific details. So, you’ll see the examples below have been genericized to protect their private information.

And, if you’re one of my coaching clients reading this and you think some of what I’ve written is familiar. It might be familiar, but I can assure you that you aren’t the only independent consultant who shares this example. As with almost everything, most independent consultants are making these same mistakes. So, an example you think sounds familiar to your business, could actually be an example from someone else’s business.

The Compounding Impact of Undercharging: 7 Examples

Oftentimes, we think that we’re undercharging by $5 per hour, $20 per hour, $100 per day, or $1500 here and there from scope creep or a deliverable you underestimated.

When you think about it that way, those numbers can seem small or insignificant.

It’s common for consultants to dismiss this, thinking it’s not worth it to rock the boat over $5 or even $1500.

But, when you think about it in this way you miss the bigger picture.

Instead, when you consider the value over time as opposed to the increment, you’ll see how undercharging adds up.

Here are 7 examples for you:

I had a coaching client who had been undercharging on her hourly rate. She was justifying this because she had recently left corporate, and her business was newer.

She was forgetting that she had 10+ years of experience doing the same work and had specialized and sought-after knowledge. After we did a deep dive into her business, she raised her rates by $50 per hour (as the first step in the comprehensive plan we created for her business).

But if you add it up over time, that’s an extra $66k for her business over the course of a year (assuming she’s working 30 hours a week and takes a month off).

And, also consider the year-over-year impact. It’s an extra $330k over 5 years, assuming she doesn’t raise her rates again (which she will).

Here’s another example of a coaching client who was undercharging on his daily rate.

He had been charging $1800 per day. As we dug into his business model, we found he could be charging $2500 per day. He didn’t feel ready for that leap yet, so we decided to make some incremental changes.

Initially, he raised his rate by $100 per day, which felt like a no-brainer for the value and impact he was making. This created a $19k raise for him over the course of a year without changing anything about the way he delivered his work.

Example #3 – Not Charging for All Project Phases

Another of my coaching clients hadn’t been charging for any of the work associated with new consulting client onboarding.

She was thinking about this as the cost of doing business, and more of a business development process than a part of the process that adds value to the client.

After she got clear on the value of this onboarding and kick-off work for her clients, and that it should be billable work, she was able to add an easy $12k to her bottom line.

Another of my coaching clients realized that he could charge $12k for a strategy session that he had been hosting previously at no charge. As a result, he upgraded his business model in such a way that he was essentially getting paid for his business development work. He now focuses on scheduling at least one of these strategy sessions per quarter, which not only fills his consulting pipeline but it also generates an extra $48k in revenue per year for his business.

We dug into her process, including helping her get more buy-in from her prospective consulting clients along the way with respect to budget and ROI.

We also worked together to help her become more solid in the benefits and value she was delivering so that (1) she didn’t discount her work right out of the gate and (2) she was sold first on her proposal before ever presenting it to her prospective client.

As a result, she was able to increase her pricing to reflect the true nature of the work and charged at least $10k per project more.

You might think you’re the only one who procrastinates when it comes to time capture and invoicing in your consulting business. You’re not alone.

Time and time again, I find independent consultants who despise invoicing, put it off, and then end up not invoicing for some of their work because they feel like too much time has passed.

For example, I had one of my coaching clients who added up all the un-invoiced work in their business over the past 12 months, and it totaled $23k. This client was shocked! They had no idea that all the micro-decisions they’d made to write off their time was that significant.

To remedy this, they delegated more of the process to their virtual assistant.

Example #6 – Undercharging for A Retainer

One of my coaching clients had several retainer clients in place. This client had to keep turning away work because they were fully utilized and had no more time to bring on additional clients.

They realized they could command a greater fee, even if one or two of those current consulting clients fell off, they could quickly replace them.

As a result, my coaching client increased their retainer rates by $3000 per month and generated an additional $36k per year without needing to increase the amount of time they were working.

Example #7 – Not Setting Up Referral Agreements

When we first started working together, one of my coaching clients told me about several referrals they had made to other consultants. They made these referrals when they either (1) didn’t have the capacity to take on more work or (2) they didn’t have the specific expertise the client needed.

In either case, my coaching client introduced their connection to the consulting client.

They didn’t ask for anything in return.

They made the connection wanting to be helpful to both the consulting client they didn’t have time to take on, and to the consultant who had the capacity and expertise to take on this client.

Later, they found out that the consultant had sold multiple projects to that client, and had made $100k+ from that introduction.

This was a missed opportunity for my coaching client.

They had wanted to do a favor.

They had wanted to pay it forward to their network.

They had wanted to be helpful.

And, they didn’t want what they felt would be a hassle from setting up a referral arrangement.

With this, they had missed the opportunity to think about the referral from a business owner lens. They overlooked the idea that by establishing a referral agreement, they could be BOTH helpful and also create a referral revenue stream for themselves.

Instead of thinking about the value they brought to both the consultant and to the company who hired that consultant, they were thinking it took income from that person.

To avoid giving away a revenue stream going forward, we set up a referral process that resulted in the (1) consulting client paying for the valuable referral and (2) the consultant compensating my client for bringing a qualified, warm lead to the table for them.

What can you do next in the areas where you’re undercharging?

For more on this

And many times, it can be very hard to figure out how to apply it to your own business.

If you want help figuring out the areas of your business where you’re undercharging and the strategies to overcome them, I’m here for you.

This is the work we do in my 90 Day Independent Consultant's Bootcamp. We implement the strategy, tactics, and mindset to transform you from a consultant into a consulting business owner so you can make more money, have more impact, and have more freedom in your life.

Melisa is a private business coach for independent consultants. She helps IC business owners scale their business so they make more money, make more impact, and grow a business working on their own terms. Melisa is the host of the Grow Your Independent Consulting podcast and creator of the scale-IC Method™️.